Riding and Pinning
DVD Only - $29.95
With Greg Strobel, Lehigh University Head Coach and '04 NWCA "Coach of the Year".

Riding your opponent in wrestling is hard work. In this DVD, Coach Strobel shows your wrestlers the fundamentals--and some tricks--that will help keep your opponent on the mat.

Strobel begins by demonstrating cradles and arm bars, covering near, far, basket, and cross-face cradles. From there he shows proper spiral rides and tight waist rides and also shows how to get some quick points with tilts from these rides. Strobel closes with his favorite move - the Far-Leg Turk. You can be a good wrestler without strong riding and pinning skills, but to be a Champion, riding is a must.

With this DVD, your young wrestlers will get a good foundation in riding and pinning skills!

Coach Strobel has been a successful wrestling coach at every level. In this break-through DVD series, he shares his expertise to benefit young wrestlers, and their coaches, to help advance this fantastic sport! In this DVD, Strobel presents fundamental techniques that every wrestler needs to know and execute from the feet. Strobel covers every area of takedowns: Drills, tie-ups, high- and low-level singles, underhooks, two-on-one, counter offense, and more. Whether you or your opponent initiate the move, these techniques will give you more opportunities to score!

Becoming a Champion Wrestler - Escapes & Reversals: The Attitude to Get Away! Video

A championship wrestler must be able to get away from his opponent. If your opponent is riding you, you're getting beat. Coach Strobel's four principles to escapes are good position, strong attitude, avoid handles, and solve the problem. Starting with a discussion on proper position, Strobel breaks down technique for three fundamental escapes: Rolls (including the Granby), switches, and stand-ups. He also shows how to "solve" the tight waist and spiral rides, as well as how to stop leg riders. This is an excellent DVD that will get your wrestlers to their feet and ready to attack!

20 Tips for Winning on the Mat (Strobel) Video

Coach Strobel presents 20 effective concepts that will make an athlete, in any weight class, a more complete wrestler in both the top and bottom position. Strobel provides 10 top position tips and 10 bottom position tips. Beginning with the top position, Strobel demonstrates how to stop your opponent's first move and then transitions into rides and pinning combinations. He covers blanket rides, wrist roll tilts, cradles, bar arm, leg riding, and how to get a stalling point. In the bottom position segment, Strobel concentrates on getting your wrestler to his feet. His tips cover good position, hand control, stopping the legs, defense against the spiral ride and crab ride, and more! 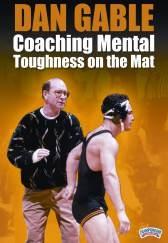 Mental Toughness
DVD Only - $39.99
With wrestling legend, Dan Gable. As a wrestler, won 15 NCAA Championships and 21 straight Big Ten Titles as the University of Iowa head coach; went undefeated in high school (IA) and won 2 NCAA titles at Iowa State University. Gable won the Olympic Gold Medal in '72 and went on to coach the Freestyle Olympic teams in '80, '84, and 2000.

Strong mental toughness leads to good technique, tactics, strength, conditioning, flexibility, recovery, and nutrition. In this lecture, legendary coach Dan Gable presents the importance of mental toughness with on the mat demonstrations and through motivational messages. Gable takes you through a practice session detailing at least five drills in the following areas: Warm-up, standing offense and defense, bottom position, top position, and recovery/conditioning. The drills presented will give your athletes an attitude that "I can take anyone down at anytime, they can't take me down, no one can ride or turn me, and I can control anyone." In short, complete mental toughness!

Tom Brands: "In Your Face" Wrestling: Attacking for Success Video 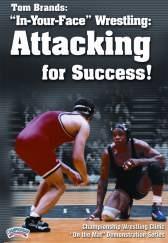 Tom Brands, in this unique demonstration clinic presentation, emphasizes the value of aggressive, physical wrestling. Brands' attacking, "in-your-face" approach resulted in three NCAA championships at the University of Iowa, two World Cup championships and an Olympic gold medal. In his presentation, Brands identifies six areas to work on in practice that will develop intelligent, physical wrestlers. Not only will these drills teach aggressiveness, they will also fine tune your offensive technique, opening up an opponent, allowing you to score. He discusses and demonstrates snaps and spins, set-ups, how to combine moves, the score-after-a-score drill, scrambles, and strength training. "In-your-face," attacking wrestling starts with an attitude and this video will give you ideas on how to instill that attitude in your practice room.

If your wrestlers are having any difficulty turning opponents once they are broken down, this video is for you! Tom Brands, one of the finest technicians in the sport today, provides a number of techniques and tricks he teaches (and used successfully as a champion wrestler) to turn an opponent to his back. Four different breakdowns used to drive the opponent's weight forward and out of position are demonstrated, followed by six common situations on-the-mat wrestlers find themselves in after breaking down an opponent. Brands demonstrates how to score from each using the turk or cross wrist series. An excellent "demo clinic" for wrestlers, and their coaches, at any level of competition!

Olympic Medalist Terry Brands shares the proper techniques that made him a two-time NCAA Champion at Iowa in this intense demonstration clinic presentation! Brands' escape philosophy is based on two principles: 1) Controlling the elbows and 2) Getting back into your opponent. Throughout the video, he shows you how each escape starts by controlling the elbow. Other tips include proper hip heist and foot position. The video concludes with a question and answer session that covers proper reactions when your wrestler gets out of position and demonstration of different escapes including his patented stand up. Once your wrestler beats his opponent to his feet, everything else falls into place.

Looking for an effective new way to get your favorite takedown? Look no further! Oklahoma State Head Coach John Smith has compiled a video filled with set-ups and tie-ups that will make you a more effective wrestler on your feet. Smith has divided the tape into three areas: Elbow control, inside control and reset positions. Each section covers more than five set-ups. Elbow control techniques covered include passing elbow, elbow hyperextension, over the top and steering wheel. Inside control techniques covered include pull/pass, inside post and wrist control. The reset position shown allows a wrestler to reverse the control with an underhook or 2-on-1.

This is an excellent video that will help set up the move and help stop the opponent's penetration!

Terry Brands lays the foundation for successful wrestling with this video, which is filled with skills and drills every wrestler needs to know to become successful. Brands begins with an in-depth look at the five most important skills in wrestling: Stance, motion, level change, penetration and drive to the finish.

This tape is a must for young or beginning wrestlers, and even for the more experienced wrestler who may have gotten away from the basics.

See also Aerobics videos, Step Aerobics, Toning and Firming, Workout or view all our Exercise and Fitness Videos and DVDs.