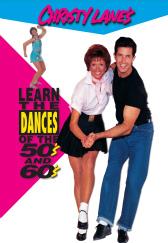 Put on your poodle skirt and roll up your jeans because swing is back and so are the dances of the 50's!

This video includes the national versions based on a nationwide survey of the most popular dances of the 50's and 60's. Learn the East Coast Swing, Stroll, Hand Jive, Bunny Hop and more. Then look "far-out" and "cool" in your bell bottoms doing the dances of the 60's including the Twist, Jerk, Monkey, Pony, Swim, Mashed Potatoes, Skate, Shimmy and more!

This three camera video was shot with the instructors back to the camera so the viewer can get the best view for learning the dances. These dances are fun to do whether you are a kid or an adult. With all the recent interest in the oldies, you can't miss out learning these dances for your next party!

Christy Lane's Learn the Dances of the 70's DVD 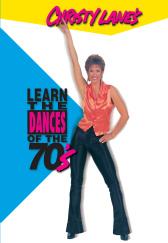 Welcome to the disco era! A time when everyone was feeling “groovy” in their polyester, platform shoes, and gold chains. Disco dancing is still “in”.

On this video, Christy Lane shows you two of the most popular line dances of the 70's, the Night Fever Line Dance and the Bus Stop. Also included are some solo dances and the ever popular partner dances, the Street Hustle and the Latin Hustle.

Geared towards ages 11 through adults, this is a must for your video collection library.

Christy Lane's Learn the Dances of the 80's DVD 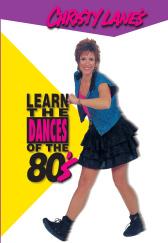 Welcome to the 1980's! The time when music television made its debut and compact discs were outselling vinyl records! Funky style dancing was the craze and it was fashionable to wear parachute pants, biker shorts or sweats.

So whether you are practicing for an upcoming party or you just want to invite your friends over, get ready to look awesome doing the dances of the 80's including the Running Man, Roger Rabbit, Robo Cop, Cabbage Patch, Moonwalk, Funky Twist, New Kids Move, Poppin’, Lockin’ and More!

Learn to dance jive and rock ‘n roll in this step-by-step program from the comfort of your own home with this great how-to DVD.

How to Jive: This program is packed with dance moves that look good and are easy to learn featuring champions of modern jive, ballroom jive, European rock ‘n roll and the lindy hop, with music by the Firebirds. So grab a partner and get ready to bop.

How to Rock 'n Roll: Learn these unbelievable dances with British and European Dance Champion Kav Kavanaugh. In this easy to follow step-by-step program, you will learn basic acrobatics and advance rock ‘n roll moves. Featuring music from the original 1950’s band, The Cobras, you will learn to rock the night way!

Learn the Dances of the 70's Video

Disco is back & hotter than ever! Join in on this national dance craze and learn the popular dances of the 70's including the Street Hustle, Latin Hustle, Night Fever Line Dance, Bus Stop, Four Corners, Bump & More! Put on your polyester and platform shoes and check this out with Christy Lane.

DVD Only - $55.00
Includes all three of Christy Lane's "Learn the Dances" titles above on one DVD.